Most games contain weapons and now that we have better graphics and more storage space we now have more weapons that can even be modded (improved). In the 1990’s when the PlayStation 1 first appeared most games only featured one main weapon per character, pick up items and some games didn’t even have weapons such as Spyro and Crash Bandicoot as they use their characteristics such as punching and breathing fire.

Weapons or Abilities in Games Before the Year 2000

In the Spyro the Dragon Series you have abilities such as fire and charge, however you can find occasional weapons such as a cannon (but it only stays in one spot). In a more recent Spyro game they have  given the player more abilities so he can compete in more tasks and explore more areas. Spyro: Enter the Dragonfly (2002) features abilities such as bubbles to capture dragonflies without harm, electric shock to stun enemies and ice breath to freeze enemies.

I really like the Crash Bandicoot Series as most of the games are quite consistent up until the two xbox released games known as ‘Crash of the Titans’ (2007) and ‘Crash Mind Over Mutant’ (2008). In most games he uses his spin attack and has a jump slam that can crush certain enemies, however, in one game they developed his abilities and also included a weapon in ‘Crash Bandicoot Warped'(1998). The Fruit Bazooka wasn’t really used much as Crash had a range of abilities in the 3rd installment of Crash Bandicoot such as Crash Dash, Death Tornado Spin and a Super-Charged Body Slam.

In Earthworm Jim he has a weapon and an ability. His ability is to use his worm-like body to get across the many levels of the game as well as kill enemies and the gun is used to kill enemies; especially the main bosses. This game was very fun as he had many uses of his head and arms to get across the level. The game was later remade in 1995 as a result of its success.

As much as I believe that games made before 2000 had a limited choice of weaponry I know that some games made at this time were all about weapons such as the game above; Worms. The game was so successful at the time that it has around 23 games in total and the game is still played to this day. The game featured weapons such as the Bananna Bomb, The Bazooka, The Grenade, Sheep, Cluster Bomb and many more.

James Pond is a Platformer, points-based game in which you save a variety of sea creatures. You get points for completing tasks, killing enemies finding objects and getting to the end of the level. The game has a lot of mechanics considering the date it was made. James Pond can use bubbles to kill enemies and and also summon friends to help out with attacks.

The Abe Series released by Oddworld Inhabitants has to be one of my favourite Game Series. It has an incredible amount of ways you can die, ways in which your friends can die and ways in which enemies can die. Weapons are used in the game either by influence of abe or the enemy (friends are usually harmless unless you slap them as they can slap you to death). The game features Sligs which have guns, Meat Crushers which can be used when pulling a lever (same with electric barriers). and a lot of bombs and other creatures. Below is a video of ’50 ways to die in Abe’s Oddysee’. This video features weapons as well as objects that can be used against you or your enemies. 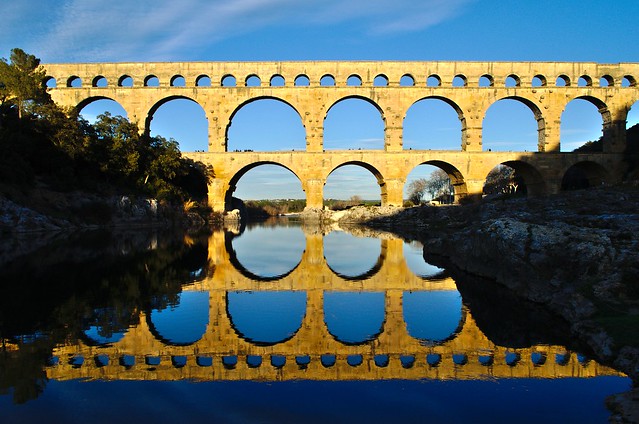 Travel in games is essential. Most games now feature what is known as ‘Fast Travel’ but first of all you need to have been explored most of the map to start fast travelling (so you don’t miss anything of the story), and second of all most people would rather travel than Fast Travel as they like to find new quests or just explore the world they are immersed in.

In the Elder Scrolls game Skyrim you cross bridges a lot. Some look plain and simple whereas some are designed to make you wonder what will be past this bridge. When crossing bridges you usually come across new towns or see some traders and sometimes even enemies. At one bridge an enemy stops you and asks for money so that you can cross in which you have two options: fight or run.

Looking at the images below you can see a simple bridge in which people are fighting and a bridge with a dragon sculpture. The simple bridge is great for fighting as the player would rather focus on the fight rather than what the bridge looks like, whereas the bridge with the dragon detail is very attracting and makes the player believe there must be something interesting ahead.

Even though the first Bioshock game is set underwater the creators still managed to create a very structural city. Obviously with the game being underwater there had to be a way to travel from building to building and to do that they made underwater bridges. There was a lot of concept art for the bridges as it is one of the main environments that is used by the player. I’m a big fan of the game and the game is meant to be scary, I think that the bridges is one of the many ways the creators made the game scary. First of all the bridges are made of glass so you can sometimes see something move in the corner of your eye, it may be a reflection or it could be an enemy waiting to sneak upon you. Also with the bridges being made of glass the bridge has a chance to break; in one part of the game the bridge leaks and slowly collapses. And finally the bridges are quite gloomy, with the ocean beign quite a deep and dark place the bridge tends to be quite scary.

The Tomb Raider Game Series is incredibly popular and well-known. The game features a lot of climbing and figuring out how to reach certain places so there are many ways to get around. The original Tomb Raider games usually feature simple rope swings or monkey bars whereas the new Tomb Raider has collapsing bridges that take you to different areas and also you can still rope swing but you use your bow and arrow to do so. One feature I like is the use of the rope accelerator which allows you to climb a rope that you have created using your bow and arrow. There are many different ways of getting places in Tomb Raider even just crossing over a log but each time you use something such as a bridge or rope you have a very  big chance of falling as the bridges are very fragile as Lara Croft explores very fragile environments that haven’t been visited for years.

The Golden Gate bridge was open to the public in 1937 with a total spend of $35 Million to make it. It is one of the most well-known bridges and is located in San Francisco. The two towers that hold the bridge up are 746 feet tall and the cables that stretch across the bridge are an incredible 7000 feet long. The reason I am blogging about this bridge is because I really like how big this bridge is. In a game I think that a big bridge can intrigue the player to wonder across it as it puts emphasis on what is behind it.

Located in London this bridge offers people the chance to have a tour of the bridge and learn about its history, experience a walk across the top of the bridge which features a glass floor with a great view of London as well as watching the bridge lift. The bridge was built between 1886 and 1894 at 213 feet high.

This arched Bridge is located in the South of France and is known for its large no. of arches. The bridge is an ancient Roman aqueduct and is 48.8m high. Its beautiful design looks amazing in the reflection from the Gardon River.

Bridges are essential in games as you need them to get to the next area and to continue the game. Some bridges don’t allow us to cross until we have completed a certain task and that encourages to complete that task as you may have a slight glimpse at what is up ahead. You don’t even have to go over the bridge, you can always go under to hide from enemies.

Today in Class we focused on Task ‘E’ and ‘F’. This module is about RPG’s (Role Playing Games) and we are to start a design process that is based around a storybook in which we picked randomly out of a box. My Storybook is ‘The Wind in the Willows’; I’m quite happy to have this book as I am quite familiar about the storyline and the characters, also as soon as I knew what book it was that I got lots of ideas popped to mind. The brief wants us to look at all aspects that would be in a game and use them in our design process of creating the game towards our random book. I’m looking forward to putting a twist on The Wind in the Willows as I have a few ideas on the environment possibilities as well as how the characters can fit into those environments, on the other hand I intend to keep some of the storyline the same and also the character personalities.

First of all I have created a spider-diagram from my current knowledge of the book and also some information from online websites and reviews. As I need to read the book again to gain more knowledge I will create a post soon that shows my research from the original book by Kenneth Grahame.

In this spider-diagram my research shows 3 categories. Characters and their Traits, Environments and finally Existing Works/Adaptations. Below shows a list of what will be staying the same and what will be changing.

The Type of Animal